On 12th December 2020, a team of Gujrat CID Crime and Railways arrested Vipul Chaudhary in Gandhinagar for breach of trust, criminal conspiracy and under sections of the prevention of corruption act (Section 405 & 120 of IPC) 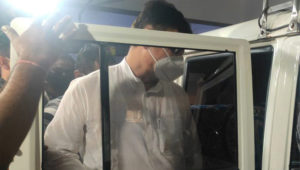 According to CID Crime officials, in October 2018, Chaudhary conspired with the current chairman of Mehsana Dudhsagar, Asha Thakor, vice chairman Moghji Patel and managing director NJ Baxi to siphon off Rs 14.8 crore meant as bonus for the 1,932 workers of the Mehsana Dudhsagar union.

There are four accused, including Chaudhary, in this case and the complainant is one of the workers at the Mehsana Dudhsagar dairy.

In an interview for a news channel, SS Raghuvanshi, deputy superintendent of police with CID Crime and Investigating Officer in the case, said, “We arrested Chaudhary on December 12 and later also held Moghji Patel and NJ Baxi who have been sent in police remand till December 19 and December 21, respectively.

The current chairman of Mehsana Dudhsagar Asha Thakor is currently absconding.” According to police, the Rs 14.8 crore bonus scam is linked to the Rs 22-crore 2013 cattle fodder controversy.

Now what is 22-crore 2013 Cattle Fodder Controversy and how it is supposed to be linked with the Bonus Scam?

When Vipul Chaudhary was the chairman of Amul, he had allegedly given cattle fodder worth of 22 crore to Maharashtra for free without allegedly consulting the union board at Amul. In the same regard FIR was registered against Vipul Chaudhary at Mehsana in 2014 and he was also ousted as Amul chairman.

According to the suspicion of officials of Gujarat CID Crime, “Since Chaudhary had to pay Rs 9 crore as compensation at the earliest, he conspired with the chairholders at Mehsana Dudhsagar to siphon off the money meant as bonus for the workers.”

Shankersinh Vaghela, in whose government Chaudhary was a minister, released a video statement earlier wherein he vouched for Chaudhary’s innocence in the fodder case. “I recall that it was (Sharad) Pawar who contacted me asking if I know any co-operative organisation in Gujarat than can provide cattle fodder to drought-prone areas in Maharashtra.

I assured him that it was possible, and I spoke to Vipul, who on my behest, in a very systematic manner, through official channels, sent the fodder there. There is no corruption and I am witness to this,” the former CM said.

Why is Vipul Chaudhary an important puzzle of the Scam?

Vipul Chaudhary was the home minister when Shankersinh Vaghela was CM (1996-1997). When the Vaghela government fell, Chaudhary followed the footsteps of Shankersinh Vaghela and joined the Congress party. In 2007, Vipul Chaudhary joined the Bharatiya Janata Party in the presence of the then Chief Minister Narendra Modi and pledged his loyalty towards the party after which he was chosen unopposed as the chairman of Amul and later chairman of Mehsana Dudhsagar Dairy.

However, the relations between Chaudhary and BJP soured in 2013 after the former was seen getting close to the UPA 2 regime. Chaudhary, as chairman of Amul, had also sent Rs 22 crore worth cattle fodder to the state of Maharashtra free of cost after which he earned the ire of ruling BJP and was ousted from the post of Amul chairman in 2014.

Considered close to the late Verghese Kurien, the father of the white revolution who had founded the Gujarat Co-operative Milk Marketing Federation (GCMMF) and the National Dairy Development Board (NDDB), Chaudhary is one of the board of directors at Mehsana Dudhsagar Dairy also known as Mehsana District Co-operative Milk Marketing Federation Ltd and his loyalists are currently occupying top positions in the dairy management. With elections on January 5 next year, Chaudhary is again eyeing top positions in the management.

What is a big deal about Mehsana Dudhsagar Elections?

Among the major dairies of the GCMMF, Dudhsagar reported a turnover of Rs 4,700 crore in 2018-19. Severe differences emerged between the dairy union and the federation last year when the former threatened to exit the GCMMF and sell its produce independently on the charge that the federation had stalled its payments.

Right since the ouster of Chaudhary from Amul, Mehsana Dudhsagar union had become the twig to keep him afloat in the Gujarat Dairy politics. In 2015, Chaudhary’s panel won 13 out of 16 seats thereby defeating BJP candidate Ashok Chaudhary even after the former was ousted from the Amul in 2014. Then, in 2018, Ashok Chaudhary was again defeated by Vipul’s panel led by Asha Thakor.

For the elections on January 5, Ashok Chaudhary is seen as the top contender against Vipul’s panel. When Vipul was arrested on December 12, his loyalists had termed it as political vendetta by the BJP to stop him from filing nominations for which the candidates have been given time till December 20.

*Link of the Source