Julian Assange extradition has become a cause celebre for free speech and freedom of press. But why? Who is Julian Assange? And why should the world be concerned about Assange? This article delves into WikiLeaks, the extradition proceedings and legal ramifications of the charges imposed on Assange. It is an attempt to bring out the fallacies of the present international legal systems in vogue and how they are being exploited by a conglomerate of oppressive political systems.

Julian Assange, the man with a vision of free society, the social crusader who exposed war crimes, the civilian massacres, the tyranny of bureaucratic criminals and the rampant corruption worldwide. He exposed covert intelligence operations, assassination of world leaders, destruction of entire economies of the world and his revelations almost shook the entire world! The man should have been crowned the prince of the free world, today he is on the verge of being sentenced to 175 years in prison by the world’s oldest “claimed democracy” – the United States of America.

Why should the World be Concerned?

Free media is the foundation brick of a civilization, for it gives wings to every perception and ideology, ensures justice, equality, liberty and most importantly, as absolute power corrupts absolutely, it prevents the dominance of bureaucracy. Envisage a future, where only a few power-hungry mongrels, using force and abomination as their weapons of subjugation would be dominating the so-called democratic society of the world!

This is the saga of Julian Assange, the man who single handedly dared to fight the oppressive and draconian system of lies used to manipulate truth. December 10, 2021 the black day in the history of democracy, when Britain’s Court of Appeal passed the big adios, Assange, to be extradited to US.

The U.K court was hearing U.S.A. appeal, concerning an earlier decision by a lower court that denied Assange’s extradition, citing his poor mental health. His legal team and doctors had argued that he might be driven to suicide by American Jail conditions. Assange has been incarcerated in Belmarsh maximum security prison in London since April 2019 and like Nelson Mandela, he has been suffering in confinement of some form or the other since the past 11 years.

U.S.A. called by some of the liberal thinkers, as the greatest rogue nation of the world, the government that declares itself as the ‘beacon of democracy’, an advocate of freedom of speech, has ironically indicted Assange for exercising his right to free speech and responsibility as a journalist on 18 charges relating to Wikileaks and release of 5,00,000 secret files. These files have shown the true colors of so called the country of free will and speech! They exposed its intelligence organization C.I.A.’s covert operations and war crimes and crimes against humanity in conflict areas like Iraq and Afghanistan.

Julian Paul Assange an Australian journalist, publisher and activist founded Wikileaks in 2006. This saint in human form has risked his life on several occasions by using his computing skills to prosecute individuals responsible for publishing child pornography. He has been instrumental in starting one of the first public internet service in Australia.

Under Julian Assange, Wikileaks which is a crowdsourced platform dealing with exposing classified documents revealed information that shook countries around the world. From 2007 to 2010 Wikileaks published confidential government documents, internet censorship lists and classified media from anonymous sources.

Wikileaks came on radar of the U.S.A. government after it received international recognition in 2010 for its publication of a series of leaks provided by rogue U.S.A. Army intelligence analyst Chelesa Manning. Wikileaks released Iraq War logs and the collateral murder video which turned out to be a testament to human rights abused caused due to Iraqi-western coalitions. Subsequently it also released Afghanistan war logs and published a quarter of a million U.S.A. diplomatic cables known as ‘cablegate files’. The ‘cablegate files’ showed United States espionage against U.N. and other world leaders, corruptions across countries. These leaks showed how United States and its allies had orchestrated world events like the Arab spring.

After Wikileaks leaked Manning files, U.S.A. authorities began a covert investigation to prosecute Julian Assange under Espionage Act of 1917. In November 2010, leaked documents revealed the investigation being undertaken by federal grand jury in Virginia. It was argued by free speech advocates and organizations around the world that indictment of Assange for publishing classified documents would be unreasonable and not possible because then the Justice Department of U.S.A. would also have to prosecute the news organizations and writers who published classified material. Snowden documents published in 2014 showed that Assange was on U.S.A. government’s “manhunting timeline” of 2010 and that the U.SA. had also urged its allies to open criminal investigations into Assange.

With a conspiracy to arrest him and hand him over to USA and to demeane his character, Assange was falsely implicated (no evidence could be proved subsequently) on sexual assault charges by Sweden. On account of the same charges, Sweden issued international arrest warrant in November 2010.

He surrendered in December 2010 to British police and attended his first extradition hearing. The supreme court of U.K. had ruled in favor of extradition of Assange to Sweden but by the time the legal ramifications could be set in place, the state of limitations had expired on all three of the less serious allegations. In Nov 2019 the case was closed due to weakened evidence over prolonged duration of time.

Assange is an Australian citizen but the Australian attorney-general Nicola Roxon had refused to seek any kind of involvement in any international exchanges about Assange’s future.

Is Ecuador with Assange?

Assange applied for political asylum in Ecuadorian embassy in London because of the possible extradition to Sweden which would have ultimately led to extradition to United States. United Kingdom refused to recognize the principle of diplomatic asylum. Subsequently Assange breached his bail conditions when he did not appear in court and faced arrest if he left. Citing Vienna conventions, Ecuador argued that U.K. government cannot enter the embassy and arrest Assange. From 2012 to 2015, several overt and covert tactics were used to make him leave the embassy and arrest him by police.

In August 2012 under the leadership of leftist President Rafael Correa, Ecuador granted political asylum to Assange because of the threat represented by US secret investigation against him.

In 2018, Ecuador blocked Assange’s internet connection after his leaks put the country’s relations with European nations at risk. Subsequently Assange raised the issue with the Ecuadorian government for violating his fundamental rights and freedoms by threatening to remove his protection and cut off access to the outside world. In 2019, it was revealed that a Spanish organization UC Global was helping Ecuador and C.I.A. operate extensive surveillance against him from within the embassy. Subsequently, Ecuador revoked Assange’s asylum, it is interesting to note here, that exactly a month back Ecuador had been sanctioned loans by IMF and World Bank.

International extradition is a legal process by which one country (the requesting country) may seek from another country (the requested country) the surrender of a person who is wanted for prosecution, or to serve a sentence following conviction, for a criminal offense. Extradition is governed by treaties that is legal agreements between nations and subject to specific laws within each country. The concerned treaties and local laws set out the circumstances and rules for extradition.

The treaty that operates between the two nations is the U.K.-US Extradition Treaty of 2003 which is also often claimed to be lopsided. The most common objection to the 2003 Treaty is that U.K. is required to meet a higher evidential threshold than the U.S.A. before extradition will be ordered.

In April 2019, after Wikileaks reported a corruption investigation against then Ecuador President Moreno, Assange’s asylum was revoked. Thereupon, U.K. metropolitan police arrested Assange on the basis of a U.S.A. extradition warrant. He was charged with breaching Bail conditions and found guilty. Assange was remanded to Belmarsh Prison in May 2019 and was sentenced to 50 weeks of imprisonment. Many press freedom organizations and the United Nations working group on Arbitrary Detention argued that the verdict contravened “principles of necessity and proportionality” for what was a minor violation.

In May 2019 Assange was indicted on 18 charges under the Espionage act of 1917 and Computer Fraud and Abuse Act. It needs to be noted that in June 2021, Sigurdur Ingi Thordarson, the witness in Assange’s case, known by the name “teenager”, admitted to fabricating allegations used in the US indictment , in return for FBI cooperation.

In October 2019, Assange appeared before the lower court, when Judge Baraitser ruled that Assange could not be extradited to U.S.A. on the grounds of his disturbed mental health and the risk of suicide in a US prison. Although it needs to be highlighted that she sided with the U.S.A. on every other point on commission of offences and rights.

In July 2021, Biden administration assured the Crown Prosecution Services that Assange will not be subjected to Special Administrative measures or imprisoned at ADX Florence, unless any of his subsequent actions merit it. The United States also assured that it “will consent to Assange being transferred to Australia to serve any custodial sentence imposed on him. On December 10, 2021 the High Court in U.K. ruled in favor of extraditing Assange to United States on the basis of the above assurances by the U.S.A. government.

U.S.A. won its appeal to extradite Assange due to “four assurances” sent in a Diplomatic Note These assurances were that Assange would not be made the subject of “special administrative measures nor would he be held at a maximum-security prison before or after trial.” It has also been assured that, the U.S.A. would “consent” to an application by Assange to be transferred to Australia to serve his sentence, if convicted. And while in custody in the U.S.A., Assange would receive “appropriate clinical and psychological treatment.”

The High Court of UK has directed a lower court judge to send the extradition request to the home secretary for review. The Indian-origin home secretary Priti Patel, who oversees law enforcement in the U.K., will make the final decision on whether to extradite Assange. Assange’s lawyers said in a statement that they would appeal the decision based on the assurances at the U.K.’s Supreme Court.

Julian Assange revealed the true picture of human rights exploitation and rampant abuses by US and other governments which would have stayed buried in the sands of time! Ironically, the world is more interested in crucifying Assange, then in castigating the people responsible for releasing the “dogs of war” on humanity!

With his crucifixion, the dim lights of democracy go dark all around the world. The bleakness of assurances by the U.S.A. and the complicity of U.K. authorities strikes at the very core of freedom of press. As rightly said by George Orwell “Freedom of Press if it means anything at all, means the freedom to criticize and oppose”.

Barkha Singh is a second-year student pursuing BA.LLB(Hons) from NALSAR University of Law, Hyderabad. She is an avid reader and has an analytical mind. She has keen interest in corporate law and international relations.

Requirement and Relevance of Comparative Research for better outcomes

What is the conflict between Israel and Syria? 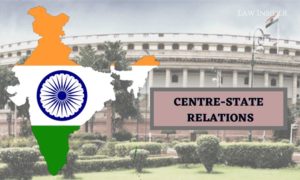 Issues in Centralized Federalism: A Case for Regionalism