Hundreds of thousands of farmers from the states of Punjab, Haryana, Rajasthan and Uttar Pradesh have marched to Delhi protesting against the central Government and the Farm Bills which were passed by the government in September which they say will destroy their livelihood. 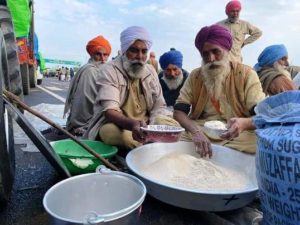 Not only leaders and politicians within India are supporting the framers, Canadian Prime Minister Justin Trudeau and Member of Parliament, Jagmeet Singh were also seen raising their support in the favour of framers.

Amid increasing tensions between Delhi Police and farmers and movement of more farmers to the capital, Union government called the farmers for discussion about their demands and resolve the problems faced by them.

The government is adamant that it will not withdraw the laws which were passed earlier this year and famers are pressuring government to fulfil their demands which has led to deadlock between them.

What led to the protests?

Angry farmers marching towards Delhi to pressurise union government into accepting their demands is the outcome of the farm bills that were passed in September this year.

Looking back to year 2018, the demands put forward by them are not new and had been discussed previously in year 2018 before the parliament in that year through private member bill which were presented by the then Lok Sabha MP, Raju Shetty.

The two bills presented were ‘The farmer’s freedom from indebtedness bill 2018’ and ‘The farmer’s right to guaranteed remunerative Minimum Support Price (MSP) for agricultural commodities Bill 2018’.

The first bill as the name suggests was focused for the government to provide freedom to farmers from debts on them. The bill stated that the government is obliged to waive loan on all the farmers including landless farmers, agricultural owners, sharecroppers etc. This suggestion was given by the farmers exploring into the reasons of increased number of farmer suicides in the country.

Second bill proposed that the government should decrease and regulate the cost price of commodities that are used in farming such as seeds, fertilizers, diesel, machines, equipment and also to set up a commission to regulate the cost of production.

These private member bills never discussed in parliament which displeased the farmers and passing of new bills this year added fuel to fire.

The new legislations against which the farmers are protesting are Farmers’ Produce Trade and Commerce (Promotion and Facilitation) Act, Farmers (Empowerment and Protection) Agreement on Price Assurance and Farm Services Act, and the Essential Commodities (Amendment) Act.

Farmers’ Produce Trade and Commerce (Promotion and Facilitation) Act affirms to create an environment where the farmers and traders will have a freedom of choice of sale and purchase of agricultural products. Also, under this legislation the farmers will not have to bear any transportation charges, and they will be able to engage with the market directly which will eliminate the need of intermediaries.

(Empowerment and Protection) Agreement on Price Assurance and Farm Services Act empowers the farmers to engage with retailers, wholesalers, sponsors and get assurance of price before they sow the crops. They will also be protected from market risks as the prices will be pre-determined.

The farmers do not support these legislations and believe that these laws will open sale of their agricultural products outside the Agricultural Produce Market Committee (mandis) and remove the barrier on interstate trade which will disadvantage for the famers.

Abolishment of mandis also means getting rid of commission agents which work with the famers and have friendly relations with them from a very long time. These agents take acre of farmer’s loans and also help them in procuring timely and adequate payments for their crops and if they are done away with, the farmers will be left to the mercy of corporates.

Representatives of farmers are saying that their protests are against the introduction of corporate houses in the agricultural sector because it will remove the system of Minimum Support Price which is like an incentive to the farmers provided by the government where the farmers are guaranteed a minimum price for their produce. And even if these corporates are providing price in exchange of agricultural products, there is no mechanism of price fixation that will lead to abrupt and unmethodical ways of price determination depending on the will of the companies.

Farmers are calling on the Union Government to either repeal the farmer laws passed or guarantee MSP to farmers in writing. As a result of increasing tensions, the government agreed to talk with the representatives of farmers to come to a solution.

Agriculture minister Narendra Tomar, cabinet minister Piyush Goyal and junior industry minister Som Prakash met with a 35-member team of farmers on December 1 to hear the demands and problems of farmers. Government decided to form a committee to look into the laws and sort out the differences but it was turned down by the protesting farmers and were uncompromising on fulfilling their demands.

This meeting reached no conclusions and further a meeting was decided to take place on 3rd December.

In the fourth round of talks that took place on December 3, farmers were still rigid in forcing the government to repeal the laws through a special parliamentary session and stated that they will not stop protesting till their demands are met.

“The farmer leader suggested the government that a special session of parliament be called and new farm laws to be established.” [1]

Union agriculture minister Narendra Singh Tomar assured the farmers that MSP will not be touched and union government has promised not keep a check on MSP. Government is also not ready to repeal the laws and suggested in the meeting for amendment said laws which did not satisfied the farmers as it is one of the main reasons of the protests and has led to the halt between the government and the farmers.

Both the government and the farmers are adamant on their suggestions and no compromise has been reached yet. Another meeting is scheduled on 5th December and it is hoped that both the sides will come to a common decision regarding the farm laws.

The reason for this deadlock can be the violent and stubborn nature of the protesting farmers and they are not inclined to discussions or listening to the government officials.

Encouraged and supported by opposition parties, these protests have become a political attack on the ruling government. The farmers are not ready to compromise their demands and on the other hand Union government is unbending on their decisions.

Government is stating that these new legislations will help in growth of agriculture sector through private sector investment and they will also help small scale farmers who are unable to bargain for their price in the markets.

Farmers are contending that after the removal of APMC, they will be left to the wish and will of the private companies and corporates and their income will not be safeguarded. Both sides are unaware of the pros and cons of application of these laws and hence are unable to reach common grounds for speedy and effective resolving of this issue.