A plea deal helps both sides to escape a prolonged court hearing which can encourage criminal suspects on a more serious offense to avoid the possibility of prosecution at trial. For example, in the justice system of the USA the option to plead guilty to a minor offense, which does not entail a custodial penalty, may be given to a convicted defendant charged with a felony theft charge, the punishment of which may entail confinement in state prison.

For defense counsel, plea negotiating may raise a challenge in that they must choose between actively pursuing a good deal with their current client or keeping a good relationship with the prosecution to support potential clients. However, for example, in the case of the USA, defense lawyers are required by the ethics of the bar to protect the rights of the present client against the interests of others. Violation of this provision can result in punitive fines being levied by the relevant state’s bar association against the defense attorney.

Some of the main Advantages are as follows –

Plea Bargains have been stated as a voluntary change that lets both the parties have an amicable situation in which the defense has many ways to disturb the trial by the way of procedural and substance rights including the right to trial. By pleading guilty, in return for a promise from the judge, such as a diminished penalty or a fairer punishment, defendants forfeit these protections. A waiver on the penalty is more helpful than an unlikely probability of acquittal for a criminal who assumes their guilt is almost inevitable. A verdict is won by the prosecution while minimizing the need to devote time and money to plan for the indictment and a future trial.

A verdict is won by the prosecution while eliminating the need to devote time and money to the planning of the proceedings and a future trial. Similarly, plea bargaining helps save time and money for the case in which the trial takes place. This also means that there is no need for suspects and witnesses to appear at the trial, which can be traumatic and exhausting in some circumstances.

Some of the main Disadvantages are as follows –

Plea bargaining, particularly outside the United States, have been criticized because its close relationship with incentives, intimidation and bribery can jeopardize the right legal result.It is also criticized for reasons such as innocents being accused, misalignment of goals and incentives, issues for cost of justice, etc. One explanation why, in many nations, plea bargaining is banned is academic work based on the prisoner’s dilemma. Sometimes, the situation of the prisoner’s dilemma applies precisely: it is in the interest of all suspects to confess and testify against the other defendant, regardless of the accused’s innocence. The worst case, arguably, is where only one person is responsible: here, there is little motive for the innocent to confess, while the guilty one has a clear motivation to confess and lie against the innocent (including false testimony).

In plea bargaining, agency issues can occur when, while the lawyer serves the individuals and the defense counsel represents the client, the priorities of both agents may not be compatible with those of their principals. Prosecutors and defense lawyers, for instance, may aim to maintain friendly relations with each other, causing a likely dispute with the groups they represent. For defending a defendant, a defense attorney may receive a fixed rate or may not receive extra compensation for bringing a lawsuit to trial, providing an opportunity for the defense attorney to settle a case to maximize income or to escape a financial loss.

A lawyer may choose to preserve a high conviction rate to stop losing high-profile cases, increasing the opportunity for them to enter into a plea deal that protects their interests but undermines the prosecution’s willingness and punishment to prevent crime. Prosecutors may even make prosecution decisions that impact the sentence of a suspect substantially, and may bring charges or propose plea agreements that require a plea bargain to be contemplated or approved by such an innocent defendant.

Another point against plea bargaining is that the expense of conducting justice does not necessarily decline. For instance, if a lawyer has just a 25 percent chance of winning his case and bringing a convict to jail for 10 years, they can make a one-year sentence plea agreement; however, if plea bargaining is unavailable, a prosecutor may withdraw the case altogether.

The Law Commission’s 154th Article was the first to propose the ‘plea bargain deal’ in the Indian Criminal Justice System. It described Plea Bargaining as an alternate tactic that should be taken up in Indian courts to deal with huge delays in criminal trials.

A committee was then set up under the NDA government, led by the former Chief Justice of the High Courts of Karnataka and Kerala, Justice V.S.Malimath, to tackle the problem of the escalating number of criminal cases. The Malimath Committee proposed a framework for the arbitration of pleas in India. The committee reported that it would promote the swift processing of criminal prosecutions and reduce the burden on the courts.

The proposed Criminal Law (Amendment) Bill, 2003, was then adopted in parliament and ultimately became an enforceable Indian law from July 5, 2006 onwards. It sought to reform the Indian Penal Code 1860 (IPC), the Criminal Practice Code 1973 (CrPC) and the Indian Evidence Act 1892 to strengthen the country’s current Criminal Justice System, which is overwhelmed with a multitude of criminal cases and, on the one hand, an overabundant delay in their processing and, on the other hand, a relatively low conviction rate in cases involving serious offences. The 2003 Criminal Law (Amendment) Bill focused on the following main criminal justice system issues:

It eventually added Section 265A of Chapter XXIA to 265L and introduced the notion of plea bargaining in India. It added the following provisions:

Section 265-A (Application of Chapter)

The mechanism of plea bargaining shall extend to the accused who is charged with any crime other than that punishable by death or execution, or life imprisonment, or incarceration for a term longer than seven years. Section 265 A (2) of the Code confers upon the central government the power to notify it of the offenses.

265-B section (Application for Plea Bargaining)

An individual accused of a crime can applies for plea bargaining for cases that are pending. It is for the accused to file an application for plea bargaining including brief descriptions of the prosecution relating to which the application is filed includes the offences to which the case applies and is to be followed by an affidavit signed by the accused stating that he willingly accepted the offer, the plea bargaining the extent and degree of the sentence provided for under the law for the crime, the plea bargaining in his case that he had not already been tried by a court in a case in which he had been charged. The court would then give a notice of the date set for the negotiation of the plea to the public prosecutor involved, the prosecuting officer of the case, the survivor of the case, and the accused. The court shall, when the parties appear, question the accused on camera, where the other parties are not present in the case, so that they are satisfied that the accused has voluntarily submitted the application and is not forced to do so.

This clause deals with the planning of and delivery of a report of mutually agreeable disposition. There may be two circumstances here, namely,

The Court shall dispose of the case in the following manner, namely; The Court shall award the compensation to the victim in accordance with the disposition under section 265D and hear the parties on the quantum of the punishment, releasing of the accused on probation of good conduct or after admonition under section 360 or for dealing with the accused under the provisions of the Probation of Offenders Act, 1958 (20 of 1958) or any other law for the time being in force and follow the procedure specified in the succeeding clauses for imposing the punishment on the accused;

Section 265-F (Judgment of the Court)

It speaks, in terms of mutually agreeable disposition, of the pronouncement of a verdict

It notes that no appeal can be lodged against a plea-bargaining verdict, but it is possible to file a Special Leave Petition (Article 136) or a written petition (Article 226 or 227).

Section 265-H (Power of the Court in Plea Bargaining)

It talks about the court’s powers in the negotiation of pleas. Such powers include powers under the Criminal Procedure Code relating to parole, the prosecution of offences and other matters relating to the disposition of a case in such a court.

It states that Section 428 of the CrPC applies to the setting-off of the term of incarceration against the sentence of imprisonment imposed by the accused according to this clause.

Section 265-K (Statement of the accused to be used)

It specifies that, except for the purpose referred to in the chapter, the statements or facts stated by the accused in the application under section 265-B shall not be used for any other purpose

Section 265-L (Non-application of the chapter)

It clarifies that this chapter will not be applicable in case of any juvenile or child as defined in Section 2(k) of Juvenile Justice (Care and Protection of Children) Act, 2000.

Filing of charge sheet: Where the Officer-in-Charge in the station forwards the report under Section 173, Cr.P.C. Against the convict arguing that he has committed an offense for which the statute allows for the penalty of imprisonment for a period not exceeding 7 years.

Cognizance of offence and issuance of process: Here, the Magistrate has taken notice of a crime for which a sentence of imprisonment for a period not exceeding 7 years is provided by statute, and after interviewing the plaintiff and witnesses under Section 200, the process against the accused under Section 204 has been released.

STEP 2 – Procedure on filing of the application

STEP 5 – Representation by a Pleader/Advocate

STEP 9- Mode of disposal of the case

Point to note – The application of section 360 of Criminal Procedure Code is subject to enforcement of Probation of Offenders Act, 1958. 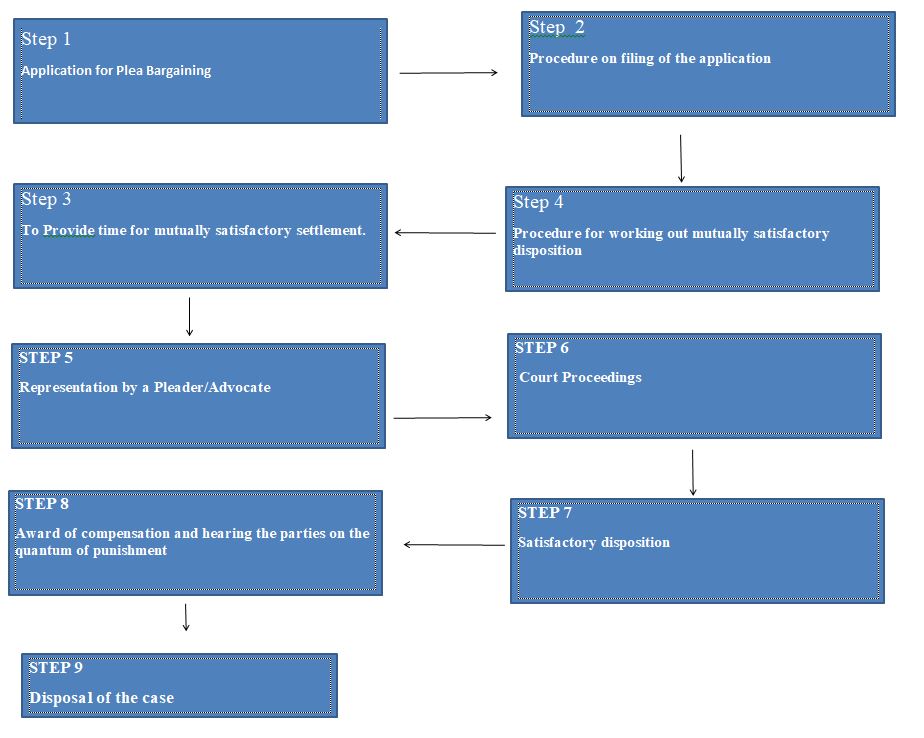 As we all know in the start of the pandemic there was a huge gathering of the Tablighi Jamaat International Conference in a masjid which led to the spreading of the COVID-19 virus. Due to this the police filed 47 charge sheets against 915 foreign individuals on the grounds of violation COVID-19 rules and on the account of visa violations. These charges amounted to serious crimes which would result in a punishment maximum of 7 years imprisonment. As the 915 members were foreigners, letting them stay in India would cause many problems for the Indian officials as well as for them due to the lengthy process of Indian judicial system.

Due to the above reasons the lawyers of the foreigners Fahim Khan and Ahmed Khan suggested them to take a Plea Bargain out of the 915 people 94 of them took the barging and were allowed to walk with a fine of 5000 rupees and were bailed with a bond of 10000 rupees. This allowed the courts to process faster and hence dispose of the case at the earliest which would have taken many months in the regular proceedings. This also allowed the foreigners to go to their home countries even faster. This was done by informing the Sub-divisional magistrate of Defence Colony, who was the complainant in the case, ACP of Lajpat Nagar, Inspector of Nizamuddin and duly their response was that they had no objections.