In the midst of the global COVID-19 pandemic, two forms of shocks have been inflicted on countries to a large extent: a health shock and an economic shock. Given the nature of the highly infectious disease, measures such as the imposition of social distancing, self-isolation at home, the closing of institutions and public services, limits on mobility and even the quarantine of an entire country are among the ways of controlling the spread. Such behavior may potentially have direct repercussions for economies around the world, and successful disease control requires a country’s economy to stop its normal functioning, causing fears of a drastic and long period of recession. Many countries have experienced negative per capita growth around the globe.

The pandemic that emerged in China in December 2019 and spread rapidly to almost all countries in the world over the next few months could potentially turn out to be the most important public health problem in our history. On 30 January 2020, India reported the first case of the disease, which has, by now seen 10 million Indians get affected by it. Since the beginning of 2020, there has been a steady and substantial increase in cases, especially in the developed world that have experienced a series of shutdowns and subsequent openings.

It may take a long time for the economy to recover from this shock, even if the lockdown was lifted by June 2020, to a large extent, the recovery will depend on the policy responses of the government and the Reserve Bank of India (RBI) during the crisis period. As activity around the country has come to a halt, with no job or income, millions of migrant workers have either returned to their native villages or were staying at camps inside the cities because state borders have been sealed. Indian economy in the pre-COVID-19 period. Overall, urban consumption appears to have lost steam in this period of crisis.

Among the indicators of rural consumption, motorcycle sales and the consumer non-durable segment remained in contraction till the ending months of 2020. High-frequency indicators of public consumption demand show that sales of passenger vehicles as well as consumer durables growth contracted and finally improved later. Private sector investment had been stagnant for several years and declining in recent times, and consumption expenditure had also been falling, for the first time in several decades.

In response to the financial losses sustained the government and RBI have doled out 420 billion USD worth of economic stimulus in various groups to improve the economy. Most of this amount would be handed out through long term schemes and has led to experts fearing over the fact that would it help in the current period. An income analysis by Credit Suisse done earlier in the year showed an estimated INR 20 trillion loss to the Indian economy. This has now been reduced to INR 15 Trillion, mostly through drastic cost cutting measures.

Insolvency has been a major fear among business owners during the pandemic as a rapid decline in sales would lead to massive losses and eventual end of the operations. As a counter measure, On June 05 2020, the Indian Government through the President promulgated the Insolvency and Bankruptcy Code (Amendment) Ordinance, 2020 (‘Ordinance’). The Ordinance suspended Sections 7, 9 and 10 of the Insolvency & Bankruptcy Law, 2016 (‘Code’) to prevent creditors from dragging corporate bodies facing financial distress into insolvency proceedings because they were unable to fulfill their financial obligations due to the spread of COVID-19.

The Code, which was brought forth to achieve objectives such as to consolidate and amend the laws relating to reorganization and insolvency resolution of corporate persons, partnership firms and individuals in a time bound manner, to promote entrepreneurship and availability of credit and to improve the ease of doing business and facilitate more investments leading to higher economic development is at this time a legislation which would help many business pass through this difficult period through restructuring than liquidation.

Section 10A which has been introduced into the Code by the Ordinance, effectively allows for the suspension of sections 7, 9 and 10 of the Code for a period of six months (extendable by maximum one year). 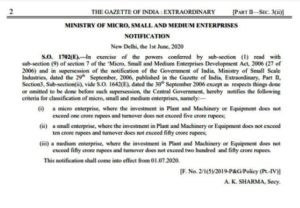 As part of the economic stimulus, the Government has introduced various incentives for MSMEs through the Aatmanirbhar Bharat Package, such as the approval of the equity injection of 50,000 crores INR, three lakh crore rupees worth of collateral free loans to MSMEs, among many others, for their operational needs.

Although these measures seem to help businesses in the short term, this period has also led many experts to rethink some key measures in the code. As per the existing laws, an insolvency professional would be assigned the task to help the company stand on its feet by selling assets and taking decisions which would lead to massive restructuring inside the company. But it has been seen in the brief history of the code that most businesses get liquidated or sold off in parts as that measure seems to bring more value than to the debtor who has defaulted than any other option. Hence in order to help businesses survive this period, some radical measures are needed. Two such measures have been discussed-

Light Touch Administration – This scheme can be found in British Insolvency laws. Though it is not used generally, but the pandemic has forced many businesses to adopt such a route. Under this process, directors of the company remain in control of the day to day running rather than relinquishing this control to the appointed administrators (Insolvency Professionals, in our case). This is a hugely attractive proposition to business owners who believe in the long-term viability of their business and are keen to trade through the current situation without the threat of creditors commencing legal action.

While the light touch process allows the current owners to retain control of the day-to-day activities of the business, the appointed administrators of the company will still have responsibility for the overall management of the company’s affairs while it is in administration. This may mean that limits are placed upon access to the company’s funds. The extent of these limits will be determined on a case-by-case basis with the reasons behind the company’s current financial problems, and the overall health of the business both before and during Covid-19, being a significant factor.

The idea behind the light-touch process is that this allows the directors to exercise key management powers to restructure the business under the oversight of the administrators and with the benefit of the statutory moratorium, with the ultimate aim that the company is rescued as a going concern, while incurring less expense in the process. The expenses are reduced because the administrators will only carry out essential functions rather than taking full executive and operational control of the company using their own staff to do so and making the relevant company employees redundant.

Business Debt Hibernation – Adopted in New Zealand, this mechanism allows businesses affected by COVID-19 disruptions to apply for an initial month of protection while they talk to their creditors — during this period most creditors can’t take legal action to enforce their debts, i.e., applying for your business to be liquidated. If your creditors agree, you can get a further 6 months of protection. Essentially businesses negotiate forbearance on debt enforcement with a majority of their creditors to win a legally backed moratorium for a defined period of time,

At least half of the business’s creditors must agree to the arrangement the business proposes. While a business is in Business Debt Hibernation it can continue to trade, subject to any restrictions agreed with creditors as a condition of entering into hibernation.

Whats different between this scheme and the suspension of insolvency proceedings in India is that the relationship between Creditor and debtor does not get disrupted as the creditor stays connected to the business and more importantly, he/she can listen to the grievances of the debtor on their own and can then help them to take crucial decisions for the business. The confidence and trust of the creditor on the debtor and vice versa also increases through the latter scheme.

As part of the Prime Minister’s Objective of building a Self-Dependent India, measures like the two mentioned above will definitely help business owners not just in the short term but also in the long run, as commercial activities, while remaining benign for a short period of time would stay put for a long period rather than crumbling down and being sold to somebody else.