At the State level, the High Court is the Head of the Judiciary.

The Indian High Court Act of 1861 established the first High courts in India in Calcutta, Bombay, and Madras in 1862.

There are currently twenty-five High Courts in India, each having an adequate number of benches in their respective states.

Every High Court has a Registry, which is led by the Registrar/Joint Registrar/Deputy Registrar or any other officer duly authorized in that capacity.

All Plaints, Petitions, Applications, and Memorandums of Appeal must be given in person by the Plaintiff, Petitioner, Applicant, Defendant, Respondent, Appellant, or File Party, or his lawfully authorized agent/an Advocate duly appointed by him for that purpose, at the Registry’s filing counter.

Following that, the officer in charge of the filing counter must endorse the date of receipt on the document (i.e., petition, petition, memorandum of appeal or application, etc.) given as well as the duplicate copy of the index and return it to the filing party.

The opposite party is summoned to attend and file a response to the application/pleading lodged against them. The summons are served in accordance with Order 5 of the 1908 Code of Civil Procedure.

If the Writ of Summons is not properly served within a reasonable time, the case is set for dismissal.

As a response to the opposite party’s response, the party instituting the suit may file a replication.

Pre-admission hearings are commonly encountered in appeals and writ petitions.

At this point, the party submitting the complaint presents its arguments in an attempt to persuade the court that the case presented has validity.

Following the admission of the case, the normal hearing of the case begins.

The Court reviews the pleadings, which are the written arguments filed by the Parties, at this stage.

Once the Petitioner/Applicant/Appellant has submitted a concise narrative of the case to the court through their pleadings, the opposing party is invited to present a reply to such pleading.

The opposing party subsequently files a written reply, known as a ‘reply on affidavit/affidavit in reply.’

. It is important to remember, however, that such replies are only offered when the Court permits the authority to file such replies.

Final disposition at the Admission Stage: After considering the submissions, averments, and arguments presented by the first party to the case, if the Court concludes that the matter is capable of being disposed of within a short time at the admission stage, the matter is placed on the Motion Hearing list.

This step is conducted to complete the ‘Final disposition of the matter at the Admission Stage.’

The Notice is served to the opposite Party, and they are invited to file a reply and attend court.

The case is heard and finally disposed of once the opposing party appears. 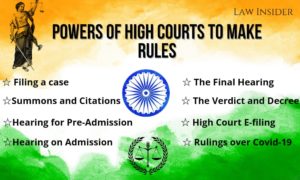 Every High Court has a Board of Final Hearings that catalogs the cases as they come up for hearing.

The Advocates for the two parties are obligated to exchange their separate lists of court precedents to which they are likely to refer in the final argument at least one week before the day set for the final arguments.

In addition, the Advocates for the respective parties are obliged to produce a brief overview of the issues and details of the relied-upon oral and documentary evidence in the case within the time frame specified.

Both Parties to the lawsuit present the last argument on the issues framed on the day set for the final hearing. Evidence and Court precedents support such an argument.

The Final Hearing is not usually concluded in a single day and may take many days depending on the case and the arguments offered.

The Court may issue a decision after hearing the last arguments and thoroughly evaluating the Evidence, or it may postpone the decision until a later date.

The Verdict and the Decree

After hearing the Final argument, the Judge/Judges formulate a decision with proper rationale.

The Court renders its decision on the specified day.

It is not required for the Court to read out the entire judgment; rather, the Court should only read out the Court’s conclusions on each subject and the final order given.

High Courts in India have implemented an E-filing system that allows for the Electronic filing of Legal paperwork in both Civil and Criminal Matters.

Any attorney Enrolled in the Bar Council of any State in India, or any Petitioner in person can use the E-filing system to submit a matter before the High Court.

By using electronic solutions to submit cases before several High Courts in India, the method attempts to promote paperless filing and provide time and cost-saving efficiencies.

During the COVID-19 Pandemic, High Court Processes were followed.

Due to the Covid-19 Pandemic in March 2020, The Statewide Lock down was implemented.

The Courts, however, will not be deterred from administering justice in the face of such unparalleled odds.

The High Courts decided on a virtual proceeding.

The cases were submitted electronically, and the proceedings were held via video conference.

The Judges of the High Courts adapted to the courts’ Digital Infrastructure and rendered Justice.

With the impact of COVID reduced, the High Courts have begun to conduct hearings in hybrid mode, i.e., both virtual and physical.

However, most courts have limited personal hearings to only the most serious situations.

After the Supreme Court of India, High Courts are regarded as superior courts in India.

Each High Court carries out the authority, functions, and jurisdiction bestowed upon it by several statutes.

High courts have their original and appellate side rules, which detail the procedures that each High Court follows.

Sine Non-Qua for the Legal Notice

Is Screenshot Admissible as Evidence Under Indian Evidence Act ?